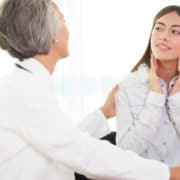 According to the National Women’s Health Information Center there are over 20 million Americans suffering from some type of thyroid disorder. A whopping one in eight women in the United States will be impacted by thyroid disorder in their lives (from the American Medical Women’s Association). Are you one of them?

Thyroid disorders and thyroid disease can have a negative impact on just about every area of your life. From weight issues to depression and anxiety, the thyroid gland is vital to keeping your physical, mental, and emotional life balanced and healthy. And what’s more is it’s estimated that about half of those in the world suffering with thyroid issues are completely unaware this is the root of their problem.

If you suffer from unexplainable symptoms but have been told that your thyroid levels are “normal”, you are not crazy and it’s not just in your head. The following are 3 common causes of low or hypothyroid dysfunction that can occur even if your blood tests look normal.

Your thyroid produces two important hormones, T4 & T3. Most people are aware of their T4 levels because that is the predominant hormone the thyroid produces; and one of the markers that doctors routinely test for.

But did you know that T4 is not the active form of the hormone that your body needs to run everything correctly?

Think of it this way, T4 is comparable to crude oil; T3 is like gasoline. Crude oil is what is harvested out of the earth, but it must be refined and converted into gasoline for us to run our cars with. If you were to just take crude oil and put it into your car’s gas tank it wouldn’t run. Well, our cells are the same way; they need T3 gasoline to run correctly.

Over 90% of the hormone your thyroid produces is crude T4 hormone. It must be converted into active T3 hormone for your body to be able to use it. This conversion takes place predominantly in the liver, and also the digestive tract to a lesser extent.

Therefore, you may have PLENTY of T4 hormones floating around your system, but if you have a toxic, overburdened liver or dysfunctioning bowel, this conversion process may not be taking place correctly. In essence, you have plenty of “crude oil”, but you’re not converting it into the usable “gasoline” for your cells.

Cellular Inflammation has been discovered to be the one commonality among all chronic diseases –from diabetes, to cancer to autoimmune disease. This type of inflammation occurs silently, but causes of host of serious problems in regards to cellular health including: altered genetic expression (bad genes become activated), toxicity build-up, and hormone receptor problems.

We are concerned with the latter of the 3 for the purpose of this article. You see, every cell in your body has thousands of hair-like projections sticking out of the cell called hormone receptors. Different types of receptors bind different types of hormones (I.E. Insulin, T3, Testosterone, etc…). When a hormone binds to a receptor site, it tells the cell to perform a specific action.

When cells become inflamed, it means the membrane that encapsulates and protects the cell becomes inflamed. This is where the hormone receptors are located. When inflammation becomes chronic, the receptors become blunted or dysfunctional and can no longer bind hormones correctly; meaning that even if you have enough T3, your cells cannot use it correctly because the receptors that bind the hormone have been damaged.

Think back to the last example again. If you have plenty of gasoline, but your gas-tank door on your car is locked, it won’t do you any good still. You need to get the gasoline into the car for it to work.

The same goes for T3 hormone. If it cannot bind to the cell receptors, it cannot perform its action within the cell. The inflammation must be corrected for the hormone receptors to work right.

Inflammation is a natural occurrence in our bodies. It is the way your body calls in your immune system to address a problem (I.E. foreign invasion).

For example, the last time you cut your hand and it became red and tender, it was your body’s way of “calling in reinforcements” to attack any foreign invaders and disarm the situation.

In a healthy person, this type of inflammation is transitory and short lived. The problem with this last scenario is when inflammation becomes chronic.

In cases of chronic, long-term inflammation the sirens signaling the immune system never get “turned off”. As a result the immune system cells can become desensitized over time; unable to differentiate between foreign and “self” cells of your body.

This is called autoimmune disease. When this occurs your immune system has become confused and begins to create antibodies against your own tissue!

There are many different types of autoimmune disease; each one classified by the tissue’s that are affected in the body. When the immune system attacks the thyroid it is known as Hashimoto’s Thyroiditis (-itis means inflammation).

Hashimoto’s Thyroiditis is not a thyroid problem at all, but rather an issue with your immune system; or more specifically your gut!

Research has shown that over 80% of your immune system lies within the gut. It has been suggested now that autoimmunity begins to occur when the digestive tract becomes diseased and perforated through a process called Leaky Gut Syndrome. Without getting into too much detail for the purpose of this article, a leaky gut is most often caused by the standard American diet and lifestyle.

Many researchers now suggest that over 80% of Hypothyroid cases may be caused by autoimmune disease, yet it is almost never tested for!

Why is this you may be asking? Because the treatment is the same for traditional or autoimmune hypothyroid cases: T4 replacement hormone. This will certainly make your blood levels look better, but it will do little to address the real problem or help with your symptoms.

Getting To The Cause

To correctly repair hypothyroid disease, the cause MUST be addressed. If you don’t address the cause, all you’re doing is chasing symptoms and making blood work look better on paper.

To determine the cause you must receive the correct testing –which involves much more than just a TSH and T4 blood work panel.

Want to join the discussion?
Feel free to contribute!

How to Read Food Labels Correctly
Scroll to top

This site uses cookies. By continuing to browse the site, you are agreeing to our use of cookies.

We may request cookies to be set on your device. We use cookies to let us know when you visit our websites, how you interact with us, to enrich your user experience, and to customize your relationship with our website.

Click on the different category headings to find out more. You can also change some of your preferences. Note that blocking some types of cookies may impact your experience on our websites and the services we are able to offer.

These cookies are strictly necessary to provide you with services available through our website and to use some of its features.

Because these cookies are strictly necessary to deliver the website, refuseing them will have impact how our site functions. You always can block or delete cookies by changing your browser settings and force blocking all cookies on this website. But this will always prompt you to accept/refuse cookies when revisiting our site.

We fully respect if you want to refuse cookies but to avoid asking you again and again kindly allow us to store a cookie for that. You are free to opt out any time or opt in for other cookies to get a better experience. If you refuse cookies we will remove all set cookies in our domain.

We provide you with a list of stored cookies on your computer in our domain so you can check what we stored. Due to security reasons we are not able to show or modify cookies from other domains. You can check these in your browser security settings.

These cookies collect information that is used either in aggregate form to help us understand how our website is being used or how effective our marketing campaigns are, or to help us customize our website and application for you in order to enhance your experience.

If you do not want that we track your visit to our site you can disable tracking in your browser here:

We also use different external services like Google Webfonts, Google Maps, and external Video providers. Since these providers may collect personal data like your IP address we allow you to block them here. Please be aware that this might heavily reduce the functionality and appearance of our site. Changes will take effect once you reload the page.

The following cookies are also needed - You can choose if you want to allow them: